Made in the UK 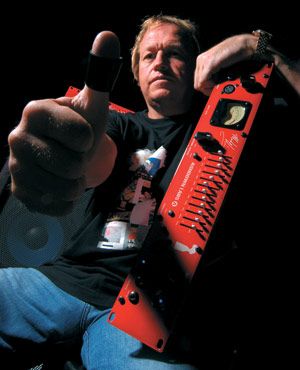 "This amp takes my sound to a whole new level" reports a delighted Mr King. "It's so dynamic, so alive!"

INSTRUMENT INPUT
There are two Instrument Inputs.The first of these is a Jack socket suitable for all Passive or Active bass
instruments with a conventional jack output.This will perfectly match the high impedance output from a
passive bass but also has sufficient headroom to accept the lower impedance and higher signal level from
active instruments.The second input is a balanced XLR input for the ultimate in low impedance
interconnection between bass instrument and amplifier.This may be used with both balanced or unbalanced
connections but is best used with a true balanced connection where it will give up to 100dB of common
mode rejection, cancelling any noise picked up on the instrument connection cable.


INPUT CONTROL
The INPUT control sets the signal level through the preamp in conjunction with the INPUT LEVEL VU
Meter.This is adjusted to give a reading of 0VU on the meter for average playing dynamics with occasional
peaks into the red region. Please note that the setting of this may have to be re-adjusted after modification
of the EQ controls. It is most important to set this control to the optimum (as described above) to get the
best noise free performance.


HARMONIC EMPHASIS
This is a new addition within this amplifier and consists of a circuit that takes the bass
signal and emphasises harmonics within it to produce a bright zingy top end. It is not an EQ circuit, it
actually synthesises new harmonics, adding these to the original sound.The best way to describe this is that
it is similar to the top end zing you get from a new set of strings.
This has a LEVEL control and can be switched in or out with the front panel switch.
Used in moderation, you will find it adds a lot of bright, high harmonics to the sound giving definition and
clarity not achievable in any other way.

The GRAPHIC EQUALISER section operates by boosting or cutting the level of signal at various frequency
points throughout the frequency range.With the sliders set on 0dB (in their centre ‘click’ position ) no
alteration is made to the signal. Moving any one of the sliders up will increase or ‘boost’ the signal at the
frequency marked below the slider. Moving the slider down will decrease or ‘cut’ the signal at that frequency.
The GRAPHIC EQUALISATION can be switched in or out with the front panel switch.
A carefully designed GRAPHIC EQUALISER is a very flexible way of varying the sound of a bass guitar and
if properly used will provide an extremely powerful method of tone shaping for your instrument.
Because of the flexibility and massive BOOST and CUT potential of this particular GRAPHIC it is
important to know how to get the best from it.
Firstly a few things not to do and the reasons why:
1. Do not boost or cut all frequency bands as this will have the same effect as increasing or decreasing the
overall volume level without affecting the tonal characteristic of the sound.
2. Do not use excessive bottom (30 to 40Hz) boost on the graphic unless your speakers can handle it.
Very few speaker systems are capable of handling frequencies as low as 30 and 40Hz with any degree of
efficiency. N.B. Boosting at 30Hz for instance will not add to the perceived amount of bottom end in
the sound, it will only make your speakers flap to no useful effect. In fact boosting at 100Hz or 180Hz
will have the apparent effect of adding far more bottom end than boosting at 30, 40 or even 60Hz.
3. Do not use excessive top (10 to 15kHz) boost, this will add mostly hiss to the sound as there is very
little signal output at this frequency from a bass.
The 30Hz slider has been provided to allow precise tailoring at very low frequencies.This slider should be used
to CUT (not Boost) the 30Hz to a level that allows the speaker system to work at its maximum efficiency.
USEFUL OBSERVATIONS
The fundamental frequency range of a regular, four string bass guitar is from 41.2Hz (bottom E string) to
around 392Hz (two octaves up on the G string) – not a very wide range. Obviously a lot of harmonics are
produced when playing and these can extend up to 5kHz and more.
The attack portion of the note also produces other high frequencies when the string is first struck.This
attack can be emphasised by boosting the top end. However because of the fairly small range of
frequencies from a bass, by top end we mean between 2.6kHz and 5kHz.You will find that by boosting at
5kHz the attack will be emphasised whereas by boosting at 1.3 and 2.6kHz you will bring out the
harmonics in the note.
Above this frequency range you will find it is better not to boost the signal as this will mainly emphasise
any hiss present.This hiss will not be masked by the bass signal when playing due to the very small amount
of bass guitar frequency content at 10 to 15kHz.
Use the 30Hz and 40Hz sliders sparingly unless you have a massive stack of speakers available, and the
power amplifiers to drive them.You will find that rolling off the bottom end by using these two sliders will
allow you to play at a far greater volume level without the speakers complaining.
Try to keep the graphic sliders balanced around 0dB and in a smooth flowing curve from one slider to the
next, and remember that after adjusting the graphic you may need to re-set the INPUT GAIN.


DI
The DI or DIRECT INJECT socket is a balanced, low impedance XLR output intended for connection into
the Microphone Input on one channel of a mixing desk.
This is to carry the signal to the P.A. system for larger gigs. It is balanced and low impedance to ensure that no noise is added to the signal on the way to the mixer.The level of this signal has been set to be similar to that from a microphone so that it will work without overloading the input on a desk that has no input Pad switch.
The signal connections are as follows: Pin 1 = Ground, Pin 2 = Signal +, Pin 3 = Signal -.
The DI signal can be switched to be PRE or POST EQ. PRE EQ is before any of the amplifier’s facilities or
EQ but after the INPUT GAIN control. POST EQ is after all internal facilities and includes the external
effects loop.


MUTE/TUNE
The front panel MUTE switch provides a mute facility that can be used to silence all outputs from the
amplifier except that from the TUNER output socket.This enables silent tuning to be carried out whilst the
amplifier speaker outputs, the DI the Effects Send and the Line Output are all muted. Once in tune the
amplifier can be un-muted and playing resumed.This switch can also be used as a STANDBY switch for
silencing the amplifier during pauses in its use.A blue LED below this switch will illuminate to indicate
when the amplifier is Muted.
To make use of the Tuning facility plug the output from the TUNER socket into the INSTRUMENT input on
your tuner.


OUTPUT LEVEL
The OUTPUT LEVEL control is used to set the stage volume of the amplifier. Use this control to adjust for
increases or decreases in your playing volume and not the INPUT GAIN control, this should always be left
set to the optimum for your instrument.


LINE OUTPUT
The LINE output is for connection to external power amplifiers and speakers to allow you to build a larger
more powerful system.This output is situated after the OUTPUT LEVEL control to allow the entire
connected system to be turned up and down with a single control.
If you require a line output that is not affected by the OUTPUT LEVEL control you may use the EFFECTS
SEND jack socket, this will obviously not include any effects loop signal. 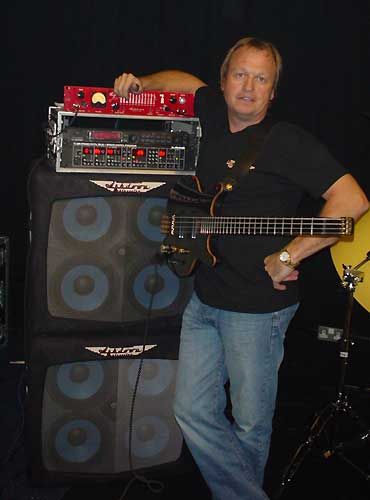